What are Performance Indicators?

For the most part, $Company and functions are expected to produce “more of the same”. This is why performance indicators often the same across time periods. E.g. a SAAS startup will always be evaluated by Annual Recurring Revenues.

However, we can also expect that the number of performance indicators expands over time. This reflects increased learning across the organization. For example:\

What are KEY Performance Indicators

(K)PIs, by nature, are stable metrics. They reflect all the things $COMPANY or a team has learned to measure since when they started to operate.

When the list of metrics gets too long, the company and individual teams need to agree which metrics are most important. This prioritization yields the “key” performance indicators: the 2 to 4 metrics that are most important and that everybody should pay attention to improving.

Every team is expected to ensure no Key Performance Indicator gets worse, and to gradually improve at least one of them with a few percent each quarter. 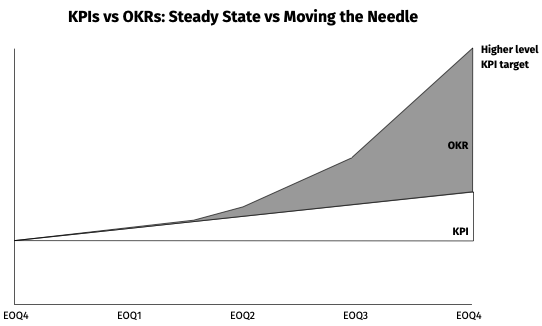 When a few percent each quarter is not enough, the company or a team needs to put extra effort behind an improvement. This is when we launch a project/initiative with an Objective and Key Result.